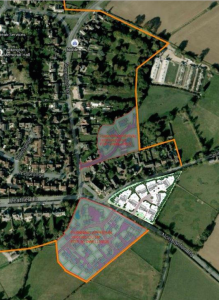 As mentioned in November’s Issue 75 of the Packington Post, just published, Outline Planning Permission has been requested for 8 houses East of Spring Lane, in land shown here as a white-ish triangle at lower-right of the map.

Also shown is the orange line marking the building development boundary of the village, as well as two other current fill-in development applications in grey.

John Steedman, a local Planning & Development Consultant, has announced the submission of a Planning Application for a development of 8 new properties on land bordering Spring Lane and the north side of Normanton Road. This is a small part of the same site where an application for 42 properties was refused by NWLDC earlier this year. 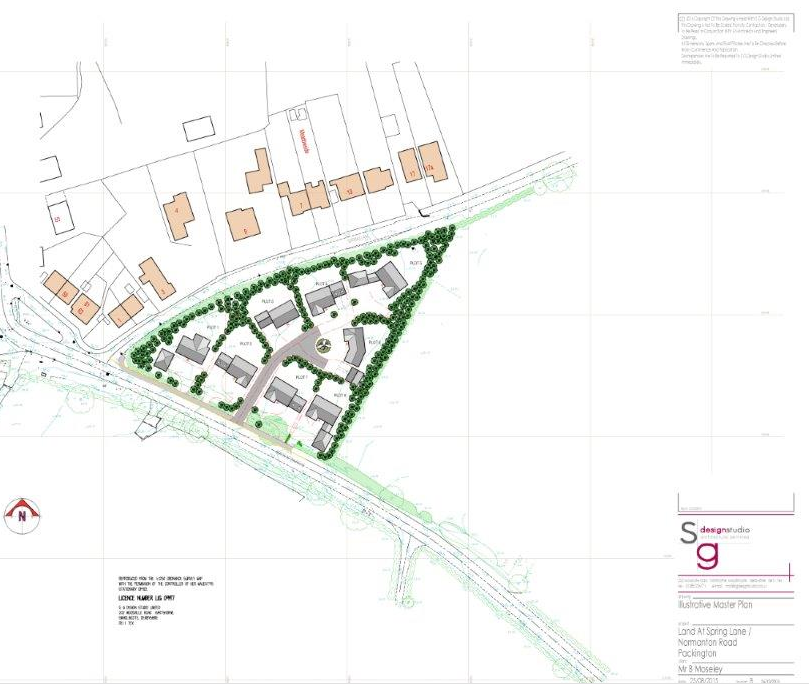 Mr Steedman commented that, despite a recommendation to approve by the Council’s officers, the earlier scheme had met opposition from Packington residents due to its large scale. The new application recognised those concerns. The concept for this new proposal is a small number of individual properties, all of which would be high quality homes. The low density currently envisaged would allow these new houses to be heavily landscaped, with the existing hedgerows retained, to provide both privacy for themselves and sensible separation and screening from the existing built environment. There would be no access of any description onto Spring Lane and the Eastern boundary would be designed to create a defensible edge to the development.

The proposal would ensure that development along the northern frontage to Normanton Road is limited to coincide with the approved development on the southern side of that road, forming a balanced entry to the Village. Highway measures to reduce the speed of vehicles entering the village past the site are already approved as part of the development already permitted, involving moving the speed limit signs and construction of a village gateway.

In overcoming NWLDC Planning Committee’s objections to the earlier development, houses along the Spring Lane side of the site would now only extend as far as the existing properties, removing the impact of the new homes on open fields and on the setting of the listed building, Packington House.

Against the background of the need for new homes in the District, Mr Steedman said he hoped that the people of Packington would recognise that with this new proposal, previous concerns have been properly taken into account, and that residents would accept a development that would bring a small number of quality homes to the village.