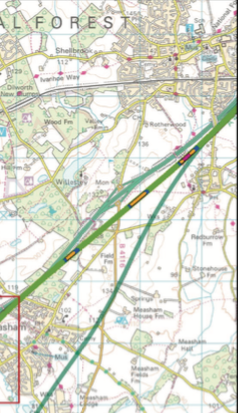 “The Secretary of State has decided not to proceed with the proposed change of route at Measham, which would have seen the alignment move to the east of Measham, away from the A42. Instead, the Secretary of State is confirming a modified version of the 2013 Preferred Route to the west of Measham. In Measham itself, the route is moved approximately 80m further east from the 2013 Preferred Route and viaduct extended from 145m to 600m to mitigate commercial property impacts.”